When I first entered the workforce as a young management consultant in 1994, I was a terrible listener. The whole point of being a consultant is to be a good listener. Ergo, I was not good. I gave it a valiant effort, but spent so much energy trying to find ways to appear smart with what I said (and the fancy glasses I wore), that many times I would miss the point of what people were telling me.

Years later, after I became CEO, my listening skills improved dramatically. (Although I would focus so intently while listening that I freaked people out with my stare. “It feels like he’s trying to stare into my soul” read one 360-degree review.) But much of my energy went into “must have all the answers” with a heaping side of “must accomplish my goals.” I was open and honest, and would listen politely, but eventually I would steamroll my own agenda after the requisite polite waiting period.

The way I see it, good conversation is the WD-40 of successful businesses – the lubrication that leads to growth, culture and success. (I figure using “lubrication” a few times will help my site traffic.) Nothing happens without good conversation. And by conversation, I don’t mean light-hearted chat; I mean, the important debate, dialogue and exchanges that drive things forward.

Being so agenda-driven, I missed a lot of good ideas because I either didn’t respect people, didn’t take time to truly listen, or because my conversational counterparts were less forceful with their messages. People might have appreciated the quick decisions I was making, but those should come after vigorous debate, not squashing ideas along the way.

Whatever I do next, I’m looking forward to learning from past mistakes and don’t want the same habits to follow me. As part of this growth, I’ve been drawn again to an essay I last read in my 20s. Michel de Montaigne was a thinker and statesman during the French Renaissance who is credited with inventing the modern essay. (You can thank him for those late nights in college.) He came from an era when people had time to consider these things without having their attention machine-gunned by status updates. When he turned 38, he locked himself away in a library and wrote about life lessons and insights using a short-form, personal, subjective style that no one had used before. It was eventually called the essay. He was basically the original blogger. That’s him on the cover below looking like a driftwood sculptor from Santa Cruz. 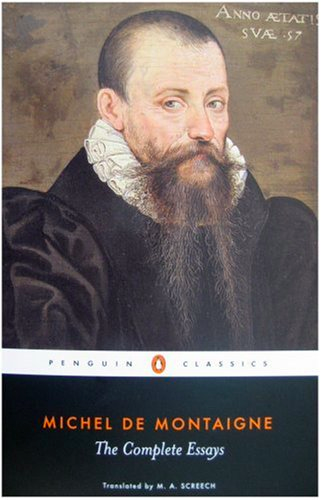 Montaigne’s essay is translated to English as the “art of conversation,” but it’s much more than that. What this guy from the Renaissance knew that most modern leaders are clueless about is how to handle the exchange of ideas effectively and gracefully. Read the whole thing to bulk up on your conversational abilities, not to mention reacquainting yourself with terms like “seedbed” and “fishwife.” Or, if you’re short on time, below are a list of nuggets I found worth posting on the wall:

1. No proposition astounds me, no belief offends me, however much opposed it may be to my own.

Montaigne instructs us to move toward those who contradict us, as that is what leads to learning and truth. We don’t want to surround ourselves with a bunch of sycophants (“a bland and harmful pleasure to have people who admire and defer to us,” he says), but people who will constantly challenge our opinions. This sounds like obvious advice, but founders often suffer from the need to be the smartest in the room and, at least subconsciously, get misguided pleasure from having people kowtow to their ideas. As Montaigne points out, the enlightened leader finds more pleasure in having his or her mind changed by a strong conversational opponent rather than by winning a battle over a doormat.

2. I can go on peacefully arguing all day if the debate is conducted with due order.

Having a good process for debate makes it a thoroughly satisfying and productive activity, and allows the best outcome to emerge. When done well, it does not matter where ideas come from, but that the right outcome is achieved. If done poorly, defensiveness spins out of control, and people will cling to their ideas like a life raft.

Most entrepreneurs are skeptical of authority and ruggedly pursue our own path in the world. As a kid, I was kicked out of classrooms, baseball games and camps. I even got kicked out of tennis matches when I was a ballboy. I couldn’t accept that there were people who could control my fate. This gave me drive, but also gave me a ton of baggage in the boardroom when it came to pushing my ideas through.

To combat these issues, I had to set up core values for the company like “seek first to understand, then be understood,” and repeat mantras in my head to control my defensiveness and avoid imagining people disintegrating a la Star Trek. Mantras like: “Don’t take it personally,” “Repeat back what they said so they know you understand,” and “Don’t imagine people disintegrating.”

3. Better to learn to talk in a tavern than our university yapshops.

In this passage, Montaigne takes on academics who wax on at length using flowery language, but have no life experience to back it up. They can repeat Aristotle verbatim, but don’t have true understanding and hide behind their big, flowery words. The takeaway here is to shed buzzwords, speak truthfully and admit when you don’t know something.

I was not immune to the allure of jargon. It sneaks up on you, and before you know it you’re a “disruptive, gamified cloud-marketiled (made up) destination for mobile users.” Keep language simple, but real. Truth wins out, and builds more respect from your colleagues.

And how awesome is “yapshop”?

4. The gravity, academic robes and rank of the one who is speaking often lend credence to arguments which are vain and silly.

I recently advised a CEO who had spent nine months working with a Sales VP recommended by the company’s lead investor. The CEO—awed by the lead investor’s status—failed to act on initial concerns that the VP was a bad fit. The result was disastrous for the company. The VP ran with a playbook that wasn’t right for the category and caused the startup to lose early customers and not gain new ones. Just because someone was successful in their prior career doesn’t mean they necessarily know what’s best for your business. Listen, consider and take the best path forward.

Side note from my consulting days: also beware of English accents. My smooth-talking English colleagues could persuade a pharma company to enter the sock-darning business before they realized what was going on.

5. Most people are rich with other’s abilities.

Or, as Stewie on Family Guy once said: “(My Myspace page has) my favorite songs and movies and things that other people have created but that I use to express my individualism.”

The business world is full of people who regurgitate what they’ve read online or hear at conferences, but don’t have the experience to back up. You may have heard these gems: “You must give away something for free to get customers.” “Retail is completely dead.” “No one would rent out their own house for a night to someone they didn’t know.”  Following these platitudes can lead to a lemming-like approach to business-building and often incorrect assumptions about markets and business models.

Challenge those who speak blindly in universals and avoid the tendency when you see it in yourself. Question why, and dig deeper.

To recap, Montaigne reminds me of a few things I need to be reminded of constantly:

Make it easy for them to question you.

Also, he pushes us to have a good time – laugh when others make fun of your shortcomings, and encourage your team to poke fun at each other during the process. We don’t give enough thanks to the Renaissance for birthing smack-talking. Almost makes up for the invention of the essay.